A weekly(-ish) newsletter on tech, investing and living better by Hitesh Suresh.

#FUN FIND OF THE WEEK
Saudi Arabia accidentally printed thousands of textbooks with a doctored picture of Yoda sitting next to King Faisal while he signed the 1945 UN Charter. 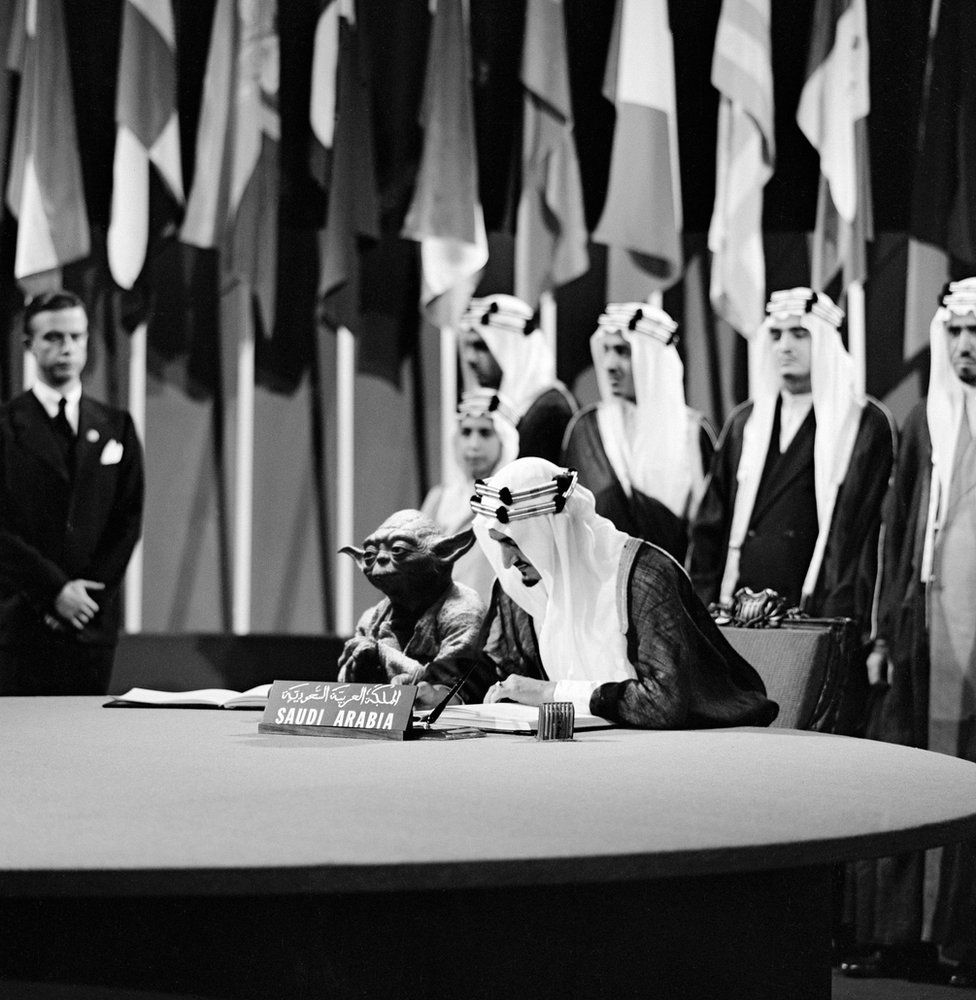 The correction was probably triggered by the gamestop fiasco. If you haven’t heard of it, here’s a great explainer.

The WallStreetBets Redditors believe they’re on a crusade, taking down greedy hedge funds and making the world a better place.

But the truth is, this is all a zero-sum game. Money has simply flowed from a few (reckless) hedge funds, into a group of (even more reckless) retail investors.

GameStop hasn’t raised any equity from their new stock price. Their business prospects look just as dim as it did 2 years ago.

The world isn’t any better than it was the week before. It is however, thoroughly more entertaining.

This 1 trillion dollar YOY increase is the largest ever seen in the history of the United States banking system.

All this money has to flow somewhere. And yet, as of Dec 2020, the US consumer price index is only up 0.4%. My guess is that once the vaccine is rolled out, and people are allowed to consume as freely as before, consumer inflation will finally hit main street.

For now, we’re already seeing signs of large money inflows into the stock market. Earnings ratios are at highs not seen since the 2000 dot com bubble. I’m starting to get nervous.

Jeremy Grantham wrote a great piece about the equities bubble we’re currently in. Paul Singer too just gave a great podcast about the high valuations we’re seeing in the bond markets.

Make no mistake, inflation will hit main street. And when that happens, equities will take a major hit.

This bull market has to eventually end. Those of us still heavily invested in the market today, myself included, are playing with fire by trying to call the top.

#INEQUALITY
The savings account data above doesn’t paint the full picture of the state of the American consumer.

I’d speculate that if you segmented it by individual net worth, you’ll see that most of the saving increases were captured by the top 50% of earners – ie. white collar workers who were able to work from home.

As for the bottom 50%, mainly the blue collar earners, their savings are likely at all time lows, propped up only by stimulus checks.

I have no first-hand knowledge of the great depression of the 1930s. My family had one of the great fortunes of the world and it was worth more than ever then. We had bigger houses, more servants, we traveled more. About the only thing that I saw directly was when my father hired some extra gardeners just to give them a job so they could eat. I really did not learn about the great depression until I read about it at Harvard.

My personal hypothesis is that wealth inequality is inevitable. In fact, with modern tools of leverage, I expect it to accelerate even further.

Allow me to explain.

In prehistoric times, the best hunter could perhaps output twice as much as the average hunter.

In the modern age, however, with leverage in the form of capital, technology and organised labour, the best white collar worker can output 100’000 times the average worker.

Archimedes was right. Give the right man, the right lever and he can move the world.

Right now, the game is rigged. It’s only a select few of us with access to these incredible levers, capturing salaries which are insane by global standards.

It’s not all doom and gloom, though. Despite rising inequality, global poverty standards are plummeting. Technology is cratering the cost of our most basic human needs, lifting millions out of poverty every day.

Excitingly, as smartphone penetration increases, more and more of the developing world will get access to the ultimate knowledge machine (the internet). It’s going to further accelerate this lift out of poverty.

Despite what we read of in mass media, the world is actually becoming a better place every single day. Inequality rises aside, our species remains on this steady march forward.

And that’s something to celebrate.

Narrated with serious aplomb by the author, it’s a quasi-philosophical book with hilarious lessons from the author’s life.

My biggest takeaway though is just what a happy-go-lucky character Matthew is.

I’m sure you personally know a few happy go lucky people as well. They seem to glide through their days with this incessant cheeky smile on their faces, never taking anything too seriously and yet, effortlessly getting everything they want in life.

These happy-go-lucky souls are magnetic. You always want to be around them.

Matthew McConaughey definitely falls into this category and his book helped me realise a key personality trait of such folks. It’s the core of what makes them tick.

I realised that happy go lucky people are full of faith.

They have faith that things will work out as they should.

Faith that if they genuinely and intelligently applied themselves, that everything will fall into place

Faith that even if it doesn’t end up the way they expect or desire, it’ll be in the way they need and deserve.

When one has such faith, their dreams become a formidable driving force, almost like a self-fulfilling prophecy.

So this week, when you’re facing your next adversity, take a deep breath, close your eyes, and have faith.