A weekly(-ish) newsletter on tech, investing and living better by Hitesh Suresh.

#FUN FIND OF THE WEEK
SpaceX became the first ever private company to send astronauts to the space station. And boy did they do it in style!

#INVESTING
I previously wrote about how difficult it is to value tech companies. Here’s a great deck by Social Capital on how they looked at their Amazon investment back in 2016.  (AMZN stock is up 6x since that presentation was made)

That pitch deck’s projections have been errily accurate. What surprises me more is how simple those calculations were. Most assumptions made there seemed really reasonable. It reminds me a lot of how Buffet would make multimillion dollar offers on companies with just a few back-of-the-envelope calculations.

Perhaps we’re doing it all wrong with our discounted cashflow models. Great investments should be simple and obvious. And if you can’t find such obvious investments, sit on your ass!

Fun fact: Social Capital’s other stock recommendations that year were Tesla (up 11x) and Workday (up 3x). Dayum.

#TECH
Apple just released a new range of laptops powered by their own M1 processor chip. The specs are insane. 20 hours of battery life!!

This, of course, is only possible because of Apple’s in house chip design team. Until now, they’ve focused on making chips exclusively for the iPhone & iPad. This new chip is their first foray into laptop-land.

I did a bit of digging into Apple’s chip design capabilities. Turns out, it was kickstarted by the acquisition of PA Semi back in April 2008 for 278 million. This was just 18 months after the launch of the first-ever iPhone.

That was a gutsy as hell acquisition. The first iPhone sold 6 million units at a 33% gross margin, bringing in ~1.5 billion in profit. Jobs and co spent ~18.5% of those profits on this single acquisition.

It was incredibly prescient of them to recognise the value of bringing this chip design capability in-house. And they were right.

Today, iPhone chips dominate mobile performance benchmark tests. The first non-iPhone chip appears at position #21 with a performance slightly over half of the latest iPhone 12 chip. (888 vs 1584)

It’s still early days for their M1 laptop chip. But I wouldn’t be surprised to see Apple soon dominate laptop benchmark tests as well. If they can fix their damn keyboard, this will be the ultimate laptop.

Intuitively, being specialised in a narrow segment of the supply chain makes sense. If I’m a company making spoons, I shouldn’t be mining and smelting my own iron ore. It makes far more sense for Rio Tinto, with their economies of scale, to do that for me.

As that Drucker quote goes “Specialise in what you do best, and outsource the rest!”

So how is Apple then able to be so successful despite its lack of specialisation?

On closer look, Apple aren’t actually “that” vertically integrated. They rely on thousands of specialised companies to help them.

Their processor chips, while designed in-house, are actually manufactured by TSMC. Similarly, for the rest of the phone, they rely on manufacturing partners such as Foxconn for assembly and Corning for the screen.

What Apple has done then, really, is to vertically integrate its white-collar knowledge functions. Its blue-collar manufacturing functions continue to adhere to traditional economic specialisation theory.

Or maybe I’m just oversimplifying everything. 🤷

#PRODUCTIVITY
This applies to all of us, not just developers 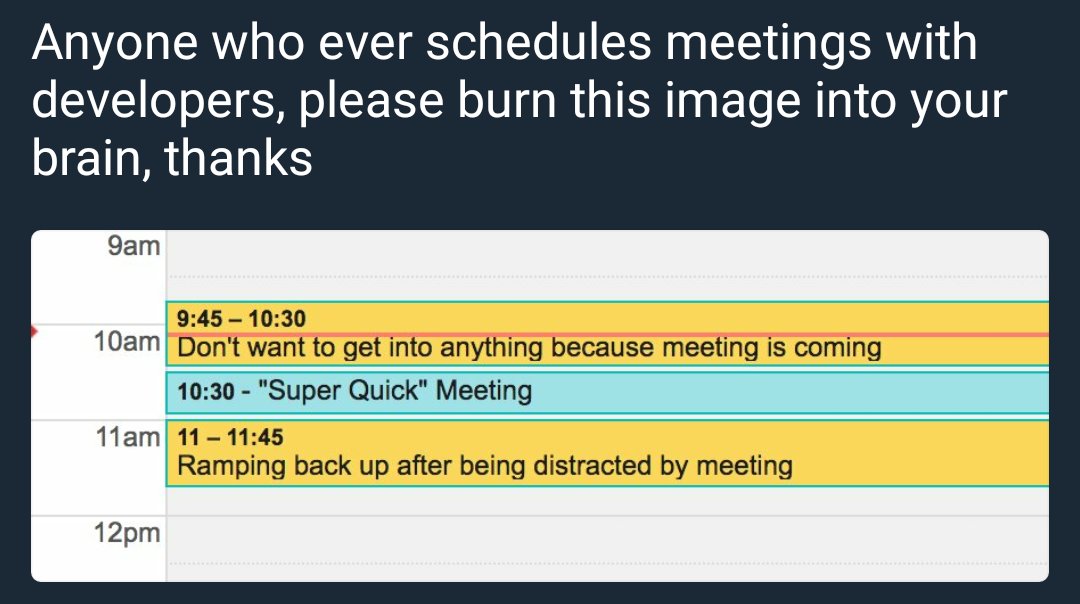 There are so many apps these days that help you schedule meetings. I’d love to see an app that helps me (politely) reject meetings!

Hope you have a lovely weekend, my friends. May next week be filled with less “meeting” and more “completing!” 🙂